Freddie, You Are Missed

20 years ago today, we lost him. There will never be another Freddie Mercury.
by Bar L. 15 comments:

WILLIAM PERLMAN/SL - Bruce Springsteen along with his band Nils Lofgren, Clarence Clemmons, Max Weinberg on drums Steven Van Zandt Patty Scialfa and Gary Talent during The Rising at the Bruce Springsteen and the E Street Bands final show at Shea Stadium on 10/4/2003.

NEW YORK — Bruce Springsteen has announced the first dates for his European tour with the E Street Band.
They’ll play four shows in England next summer.
The dates are June 21 in Sunderland; June 22 in Manchester; June 24 at the Isle of Wight festival; and July 14 at Hard Rock Calling in London.
The European shows will run from mid-May through the end of July.
They’ll also be touring in the United States. That information will be released down the road.
This will be the first tour for the E Street Band since saxophonist Clarence Clemons died in June from complications of a stroke.
Springsteen’s last tour was the “Working on a Dream” tour, which ended in 2009.
(thank you to Lawrence Kirsch who shared this on FB) 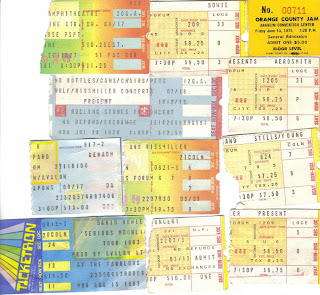 I was driving to work this morning rocking out to the radio and had several flashback memories of some great concert experiences.  So I decided to share them with you in hopes that you will share some with me!  These are really hard to answer


Most memorable concert moment: It was "The Rising Tour" which occurred shortly after 9/11.  Bruce asked for total silence in the audience, and when he had all 20,000 of us paying full attention he played "Empty Sky".  The whole night was a combination of a good time and sad time mixed together.  Very unique atmosphere.


Least favorable concert:  George Michael.  Not because he wasn't good, but because every female (other than me) in the audience was screaming at the top of their lungs the whole time and I couldn't even hear the music.  I wanted to leave but was there for a friend so I stuck it out.


Who puts on the best show: If you know me at all, you already know my answer :)  Bruce, of course!


Concert I wish I could have seen: The Doors, I was born ten years too late; and Queen.  I don't know how I missed them out of the hundreds of bands I've seen, but I did :(

Best concert I never saw:  Led Zeppelin, I still have my two tickets and have never totally forgiven Jon Van B.

Smallest inside venue: The Quiet Woman restaurant in Laguna Beach (about 50 - 75 people), Kenny Loggins dropped by and put on a show for some locals, so fun!

Best seats at a concert:  Front Row at VAN HALEN in '81, omg - talk about amazing, Eddie is one of my top 5 guitarists


Most mind blowing concert:  Pink Floyd! (i was 17, under the influence of LSD & red wine for the occasion and it truly was an incredible night under the stars, i was fearless back then)


Worst concert experience:  Losing my sister for several hours at an all day concert featuring the Rolling Stones.  I was frantic to find her and finally, right before the Stones came on, there she was. 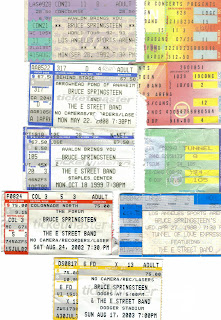 Most frightening moment at a concert:  Same Stones concert as above.  I was near the front, the crowd rushed and literally lifted me off my feet, I was screaming because I was being crushed and no one cared.  Then this big, strong "angel" came out of nowhere (picture Clarence Clemons), lifted me up and out of the crowd (I was only about 125 lbs back in the day!).  After he put me down and I thanked him I looked back again and he was GONE.

Best concert experience:  Impossible to narrow it down.  I will say I got a thrill when David Bowie smiled at me.

Most embarrassing concert moment:  Falling asleep at Pat Benatar.  I was bored after sitting through Quarterflash and Night Ranger (no offense to either band).

Funnest concert moment: Had to be during Bruce, but there are so many fun moments in all his concerts, hard to pick just one.

Best "goosebumps" moment:  U2, "Vertigo Tour", when Bono was talking about co-existing and loving our neighbor, and peace, etc. then started playing "One" the young man next to me held my hand for a moment (he was Middle Eastern) and we both had tears in our eyes. 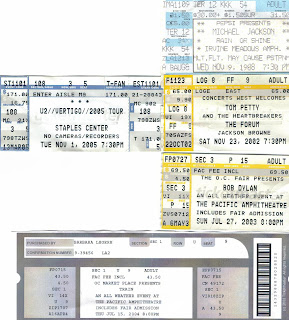 Concert I regret:  Def Lepard, only because it was stupid of me to go with the person I went with - we got there late and had crappy seats.

Best concert of all time:  Michael Jackson.  It was the "Bad" tour and Michael was at  his peak in every way.  I know this sounds corny, but I truly did feel like I was in the presence of someone very special.  The energy of his hardcore fans infused everyone else that was there and the THINGS HE DID on that stage were literally magical (he'd walk up a set of stairs, disappear in a puff of smoke then be back on the opposite side of the stage in a different outfit in a matter of seconds, like 5 seconds or less).  His DANCE MOVES, the way he held the audience captive.  His humility.  It was an experience I'll cherish forever.  RIP MJ.  (again, love him or hate him, he was one of the best, if not the best, entertainers of our time).
http://laylasclassicrock.blogspot.com/2008/05/one-i-missed.html
by Bar L. 9 comments:

Phil Collins' Hello, I Must Be Going! and Bachman-Turner Overdrive's Not Fragile

It kills me that I have let this blog fall to the wayside. 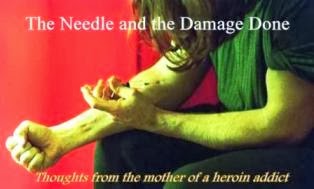 If you would have told me I'd stop writing here my response would have been, "yeah, right!  why would I ever do that!?"

Life sometimes takes us on a journey we never wanted to take.  And the one I'm on* is still robbing me from the joy I used to find in writing about my passion:  music.  I still love it, listen to it constantly (Bowie's Starman is in my ear right this minute, 100.3).  But - just can't seem to get anything on "paper".

Now I write about heroin addiction and how its affected my life, and continues to challenge me daily to stay strong, to realize I have no control over my son, and to just keeping hoping for the best and sending good thoughts out to the universe.

25 Years Of Rock and Roll Hall of Fame Inductees

Thank you, Dave White, for sharing this list today:  About Classic Rock, Rock and Roll Hall of Fame Inductees 1986 - 2011
by Bar L. No comments:

I love listening to Andy. He's one of my fave DJ's of all time. Just a down to earth guy who loves rock and roll.
by Bar L. 1 comment:

Just got back from seeing a great show right here in my backyard, literally two minutes from my house!!!  It was wild seeing Max Weinberg in Mission Viejo - who would have thunk it?

It was the opening night of our "Lord of the Strings" concert series and our Reading Festival (both put on by the Library).

Bill may be an older guy but his pipes are as great as ever.  His son was also one of the band members, playing keys and signing.

I'd never heard of Mindy before tonight but I'm officially a fan.  She was so fun and adorable and extremely talented.

They played several of Bill's songs that he wrote for other people and one from Chicago; they did some George Benson, Stevie Wonder, David Ruffin, Southside Johnny (the Fever  by Bruce) and some others.  The encore song was Ramrod by Bruce.

It was fun.  The best part for me personally was watching Max have fun, playing in a relaxed way and being The Boss of the show.  When he plays with Bruce he is so intense because he has to constantly be watching him for his cues - you never know how Bruce will mix up a set or even a song.

Before they played Ramrod he said some very sweet things about Clarence.  It made me wonder what it will feel like for Bruce to introduce the band the first time they play again.

35th Anniversary of "Dust in the Wind" 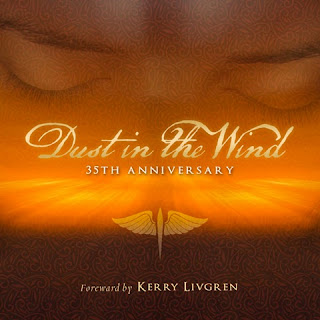 One of classic rock's most instantly recognizable and enduring songs, ‘Dust in the Wind,’ will celebrate its 35th anniversary in 2012.  As part of the celebration for this one-of-a-kind tune (penned by Kerry Livgren and first recorded by the band KANSAS), a 35th anniversary limited edition gift book is being released.

This beautifully designed 6” x 6” hardcover gift book is four-color throughout, 32-pages, and includes song lyrics, personal stories from fans, and a foreword by Kerry Livgren.  Kerry Livgren will sign books ordered by October 20, 2011.  Books cost $20, plus shipping and handling, and are available for purchase exclusively at www.kansasband.com.

A portion of the proceeds from each book will benefit Autism Speaks, the nation’s largest autism science and advocacy organization.  "Autism Speaks is thrilled to have been selected by KANSAS to receive proceeds from this exciting project about this iconic song," said Autism Speaks President Mark Roithmayr.  "The 35th Anniversary Dust in the Wind book will bring our message of awareness, treatment, and hope to a musical community of KANSAS fans through out the world."

With their aforementioned self-titled first album released in 1974, KANSAS went on to become one of the decade’s most popular rock acts – issuing classic rock albums such as 1976’s ‘Leftoverture’ and 1977’s ‘Point of Know Return,’ along with the hit singles “Carry on Wayward Son” and “Dust In the Wind,” and “Point of Know Return.”  The band, which is comprised of singer/keyboardist Steve Walsh, guitarist Rich Williams, drummer Phil Ehart, bassist Billy Greer, and violinist David Ragsdale – continues to tour in front of large and enthusiastic audiences and to this day remain a fixture on classic rock radio.

My sis and I were at this concert!

by Bar L. No comments:

Gone But Not Forgotten

My Tribute to Past Musicians

Thanks for Reading Here